The name of South Liverpool FC first came about in the late 19th century. But it was when African Royal changed its name in December 1910 that South Liverpool FC first became a local name of importance.  That club, which bears no connection with the current club, enjoyed success in its Dingle Lane home before the First World War but saw its fortunes change and by 1921 it had ceased and its remnants merged with New Brighton F.C.

One of its leading lights Mr W J Sawyer went on to ﻿be involved in both Everton FC and New Brighton FC. Our Clubman of the Year Trophy awarded annually is the WJ Sawyer Trophy kindly donated by the Sawyer family.

Our club was founded in April 1935 to respond to the increasing south-end population and began playing in the 1935/36 season in the Lancashire Combination at Holly Park.  Success was immediate and by the outbreak of the Second World War the Lancashire Combination had been won three times in succession as had the Lancashire Challenge Trophy and most impressively South defeated Cardiff City 2-1 in the Welsh Cup final at Wrexham in 1939. As that great conflict began South had moved in 1940 to link with the Cheshire League before hostilities drew a close to fully organised league football.

The post war resumption saw South in the Cheshire League, winning the League Cup in 1948 but it was never to bear the fruit pre war years had.  In 1952 South went back to the Lancashire Combination with the reserves operating in the Liverpool County Combination, winning the George Mahon Cup in 1958/59.  The mid sixties saw success under manager Alan Hampson sufficient to qualify by right for the new Northern Premier League.  South would always struggle against the wealthier and well supported clubs at this standard such as Wigan Athletic and Macclesfield Town.

In 1983/84 South enjoyed their best post war season initially under John King & George Rooney then in mid season under Brian Griffiths. South annexed the NPL League Cup, the Lancashire Challenge Trophy and the Liverpool Senior Cup.  Crucially, South’s success was not built upon and while two more Liverpool Senior Cup wins followed along with the NPL Presidents Cup, Holly Park was lost in 1989 and a move to be tenants of Bootle FC at Bucks Park before the first team was stopped playing in 1991 and the limited company went through the liquidation process, owing massive debts and was expunged finally in 1992.

Holly Park was left derelict before finally being converted to the impressive Liverpool South Parkway station. No trace of our home exists on the site but Merseytravel have a board at the entrance showcasing our history there and inside is the Ferenc Puskas plaque which was unveiled in late 2018 to commemorate the Hungarian football legend playing at Holly Park in a charity game in May 1967.

However, South supporters had already formed a committee in 1991, led by Mike Brocken, Les Bather & Mike Ryman, to take over the football side of the.  Given the limited company's late demise we were unable to immediately play senior football, but kept our youth arm playing and thus our club continued to operate. In 1992 we began in the Liverpool County Combination with Mike Ryman as manager and the Liverpool Junior Cup being won in 1997.

A nomadic home was South’s main issue moving from Cheshire Lines to Saint John Almond in Garston, on to Hale Bank then Weston Point, Runcorn before at the dawn of the Millennium we secured our home at the North Field on Jericho Lane, Otterspool.

The club would regularly be in the top quadrant of the league and challenge for cup honours.  The best Liverpool County Combination placing was 4th in 2004/2005.  A late season slip saw a 10th position finish in 2006 and South were in the First Division of the new Liverpool County Premier League. We immediately won that division and finished 4th then 5th in the following seasons but in 2010/11 finished 14th.

South’s reserve team won promotion from the second division of the County FA Premier League in 2010 and our youth team won the West Cheshire League Youth Division in 2009/10 as well as the Youth Plate in 2008/09.

2011/12 was all change as Souths first team moved into the West Cheshire League starting in the Third Division and took the title impressively winning every league away game (a club record).

South  installed pitch barriers, dugouts and more hard standing in 2011/12. Much to local residents relief the top end of the ground being used for parking reducing the traffic issues on Jericho Lane match days.

2016/17 saw both a new reserve team and youth team management in place, the first team ending 3rd and the reserves 5th showed our strong credentials with the youth team adding the West Cheshrie League Youth Division title the club's honours. 2017/18 saw South win the First Division title for the thrid time in four seasons this time by a 13 point margin. The Under 18 youth team did the West Cheshire League Youth double winning the league title and youth plate. 2018/19 saw us finish 5th in a seoasn of great playing transition.

South boast a number of well known ex players including Jimmy Case and John Aldridge who both started their careers at Holly Park before their Anfield days.

Manager Martin Ryman has been in charge since August 2001 having been in charge for over 600 games (and played for South from 1992 & 1999). His assistant between 2003 and 2018 was Kenny Deakin who had played for South in the 1984/85 in the NPL. Stephen Ward moved up form first team coach to assistant manager in 2019 having played in goal for South over 400 times and been with the club since 1995. Reserve team coach David Rietdyk is a former club captain having played 203 times for us between 2003 and 2010.

South’s longest ever serving player is Kevin Martin with over 400 first team appearnces in his unbroken 176 year career at the club.

A new chapter in our long history dawned in January  2019 as the impressive Jericho Lane Soccer Hub opened. Saturday 5th January sees our reserves play the first game on the stadium pitch at the new site, almost adjacent to The North Field. The site is part of the highly impressive multi million pound joint development by Liverpool City Council, The Liverpool County FA and the Football Association. South along with Liverpool Feds Women FC are the main football clubs on site.

2019/20 saw the club announce its intention to move to Step 6 in the Football Pyramid which requires success on the field and some stadia improvement. For the first time in nearly 30 years we hope to see our club back in the semi professional ranks of non league football. Our club sldo has an unrivalled breadth of 16 teams. Two open age, an Under 21 side, four Vets, eight youth and a seniors walking football team. Alongside our Jericho Lane Hub partners, Liverpool Feds Women, who have extensive womens teams it ensures the South end of the city has truly exciting football future. 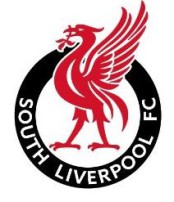 Our official club badge is of our city's liver bird and for our version it normally sits within a football. It is normally either black on white or red on white.

The Liver Bird has been our official emblem since the early 1960's. We trace its use to 1968 when the Supporters Club used it on the dark red, crest shaped, metal badge which was brought out for the start of the Northern Premier League in August 1968. The liver bird was in gold underneath the supporters club motto "Advance".

Another club emblem is an S & L interwoven, first used in 1968 on our club pennant as well as being the 1971 programme front inspired by then club director, Malcolm Bullock. This also harked back to the 1950's shirt badge of the letters in two halves of a shield seprated by red diagonal band.

The Motto "Advance" was first used by the Football Club Chairman Harrold Arrowsmith in the late 1940's as South pushed to recruit fans from the developing South end area after the war years. The supporters club then used it at the dawning of the Northern Premier League in 1968. It is no longer used by the club.