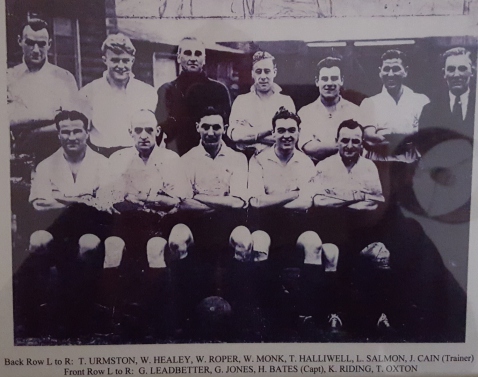 (albeit we can see his name is also spelt Cain!) 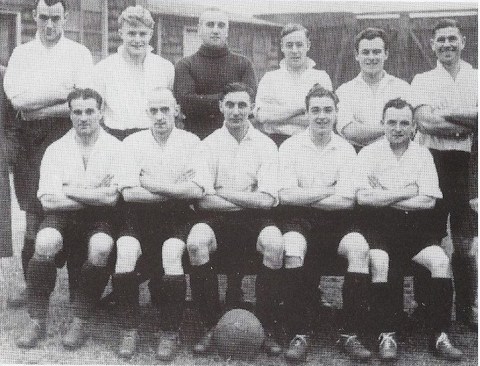 South Liverpool's first team picture after the Second World War. Its hard to pinpoint its precise date but as Len Salmon only played four games it's probably September / October 1945.

South in White Shirts, Black Shorts and Red & Black Socks as the purple maroon and gold shirts were unable to be acquired due to post war restrictions and cost. This combination remains our first team strip to this day. Our socks have been plain red for over 30 years and the socks here may well be more black - which as we know is our friends from Marine chosen colour combination.

Its also interesting to note this is post war and four pre war regulars are still in place (Roper, Salmon, Leadbetter & Jones). They would each only play in 45/46

Grateful thanks to Mr Tommy Halliwell who contacted us (Feb 2016) and has completed all the names of his team mates on the picture as well as highlighting Harold Bates was our captain at the time. 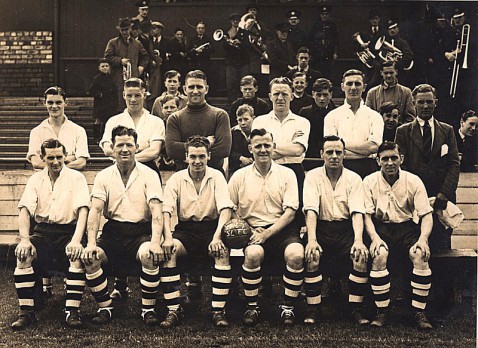 The musicians behind ﻿the team are The Dingle Silver Prize Band (Conductor W B Godfrey LNCM) who in that season regularly played before the game and at half time.

This photo is from Gerorge Corfield's family photos of W.J.D. (Bill) Kinghorn, who is his wife’s father. Bill is seated front row far left.

Bill Kinghorn signed for Liverpool FC in May 1938 from Queens Park FC Scotland and played during the 1938-39 season, but the 1939-40 season was cut short and with other Liverpool players he joined the Territorials and was a guest player at numerous clubs throughout the war period.  He left Liverpool FC after the war and was playing for South Liverpool FC in 1946-47.

George doesn’t have the precise date of the photo, but it could likely be the opening day of the season as Bill Kinghorn is named in the team. If it is we suffered a 1- 2 defeat against Wrexham Reserves. Our goal was scored by Ken Riding. Hewitt and McLarty scored for Wrexham. Jesse McLarty signed for South at the start of the 1947/48 season

Charlie Lewis was signed by Halifax Town at the end of the season staying with them to May 1949 and Alan Beaumont went on to play for Chester City.

Thanks to Danielle (Dave Parkers grandaughter) for identfying him in the picture.

His full name was Willaim David Parker and he first appeared with us in 1945/46 and was at South until late 1948 and would take over the captains role from Bob Smith in 1948.  He is called in one away programme at Buxton (16/2/1946) "Parker of the Wolves" showing where South signed him from and he was previously at Hull City

Bob Smith took the job as manager of Ajax (Amsterdam) at the end of the 1946/47 season. South would play and beat 3-2 Ajax at the end of the 47/48 season on their short Dutch tour. It is fair to point out Dutch football was some way off what it would be twenty five years later!!!

Thanks to Phil Bailey identifying his father Gordon Bailey

Gordon Bailey, prior to the War played for Everton before being called up. Prior to that he had played for Liverpool Schoolboys also also got one cap as an England Schoolboy International. Gordon generally played on the left wing but also played at inside left.

Thanks to Ray Jones son of Wilf Jones a former South Director for adding names to this picture. 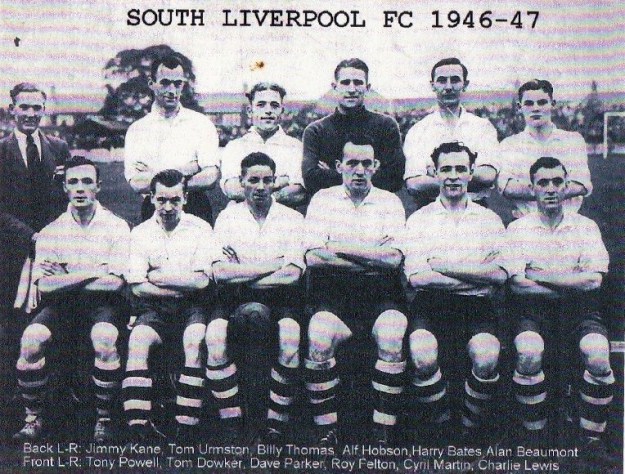 Pictured at Holly Park, prior to the Benefit game against Everton on Monday 23rd September 1946. The Benefit game was for South stalwarts, Bill Roper & George Jones who had been in South pre war team successes from 1935. 5,200 turned up that evening and we sold 2,580 programmes! Each player received a cheque from the Lord Mayor of £100 (worth about £4,000 now)

South lost 3-1 to the Blues (1 -1 half time), South's goal came from Tony Powell. Everton's came from Fielding, Grant & Higgins. The referee was Mr W H E Evans of Liverpool who was one of the most respected referees of his day. Everton's team: Birkett, Jackson, Finis, Bentham, Edwards, McPeake, Grant, Owen, Higgins, Fielding, Eglington. 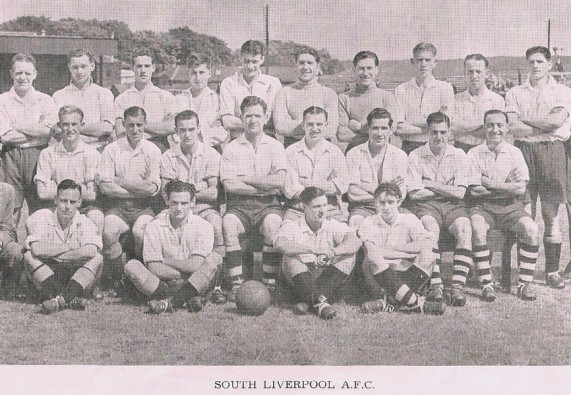 South Liverpool FC at Holly Park prior to their Isle Of Man tournament visit.

Thanks to Ian Johns for spotting his late uncle Stan Johns - Stan was transferred to West Ham later that season where his stay was short and sweet notching two 2 goals in 6 league games. He returned to Liverpool and eventually lived in Weaverham and worked for ICI while playing for Weaverham. He died in 1985 in a road accident while returning from a fishing trip.

If you can supply any player names - please email us