David was appointed Reserve Team Manager in January 2017 and ensured the team emulated the success of 2015/16 by finishing a highly creditable 5th in the division. 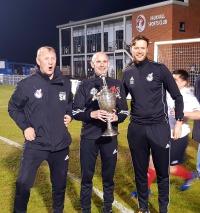 David has rejoined the South having played for club 203 times between 2003 and 2010 after which he moved to APH in the Liverpool County Premier League.

David was captain when South won promotion to the Liverpool County Premier Division in 2007 and is seen here being presented with the Divison Trophy by then League Secretary, John Deal.