Here we feature supporters memories and memorabilia from the past. 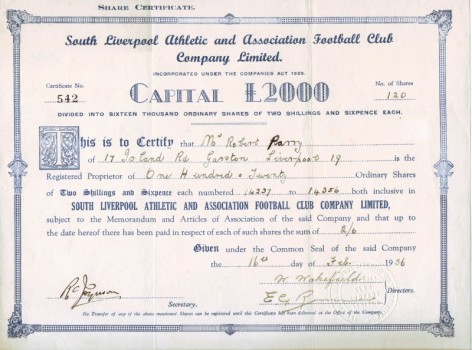 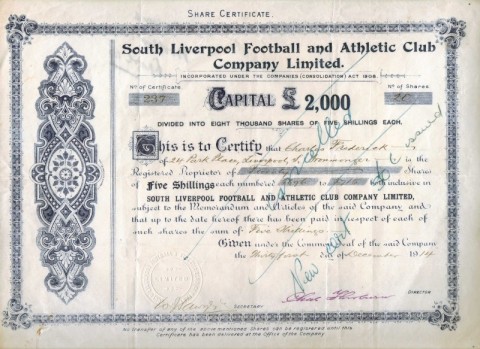 1914 Certificate of the old South 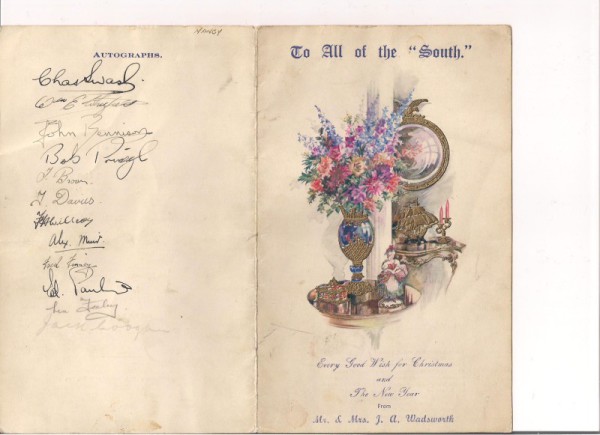 Menu with names from top

Our Coach that season was Frank Rawcliffe and we featured a Nigerian full back, Ahmad Tijiani Bactun "Experience" Ottun, who we signed after he played under the experimental Holly Park lights when South hosted a Nigerian XI the previous season, Wednesday 28th September 1949.

Thanks to George Cole, now of Lincolnshire formerly a Woolton Road ender, who spotted our error with Ted Davies - now corrected.

Happy also to ﻿mention Ted (also known as Ed) is now in his 80's and resident still in the South end in Hunts Cross and our best wishes go to our former player.

Corrections above thanks to Ray Jones son of ex Director Wilf Jones. 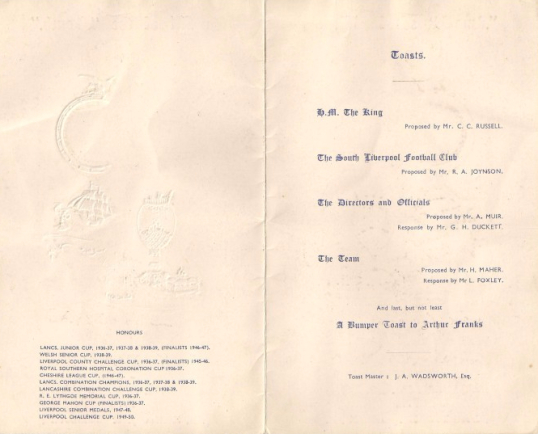 Christmas Dinner was hosted by South Director Mr J Wadsworth. It also featured a toast from R A (Arthur) Joynson who was an integral founder of our re-formed club in March 1935.  Also included is a "bumper toast" to long serving keeper Arthur Franks. 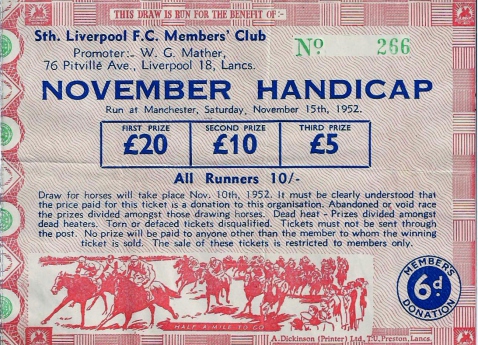 Clubs have always had to raise cash and here is an example of how South did it with a prize draw, though this one was nearly 65 years ago, when Football Club and Members Club were working as one.

It was on the result of a horse race at Manchester, the November Handicap (a major race now run at Doncaster) and that year won by a horse called Summer Rain. The old Manchester course which was in Salford has now gone.

Back then only on course betting was legally allowed and there were no street shop bookmakers and on line betting was far away in the future.

Grateful thanks to physio Tony Peet for this gem of a find (if the ticket won its too late to claim!)

An invitation to a Trial for South - 1955 style 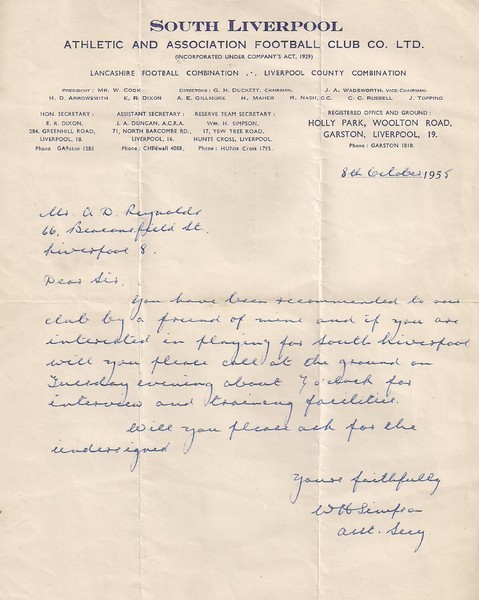 Interesting points to note on the excellent letter heading is our original club phone number Garston 1818 as well as one or two long standing names of South history. Notably Chairman George Duckett and one Director that gives a telling clue to the late Don Gillmores long standing loyalty to his beloved South, AE Gillmore being his father. 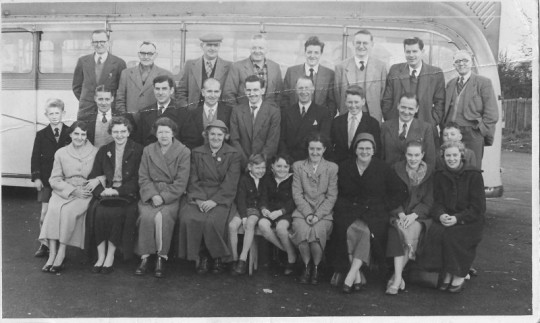 Pictured at Longton near Preston September 1957

Our first and probably oldest shot of a supporters club gathering. This was a trip to the Lancaster Town away game which we lost 4-2 and returned home via the Lights in Blackpool. The picture was most likely taken at a stop in the Preston area on the way to the game. Thanks to Club President John Whittingham for supplying this cracking piece of South Liverpool FC memorabilia.

If you know any other names please let us know.

Thanks to Brian Davies for the update (July 2010)

Thanks to Colin Gleave for spotting Ralph & Edna Gleave (Dec 2012)﻿ 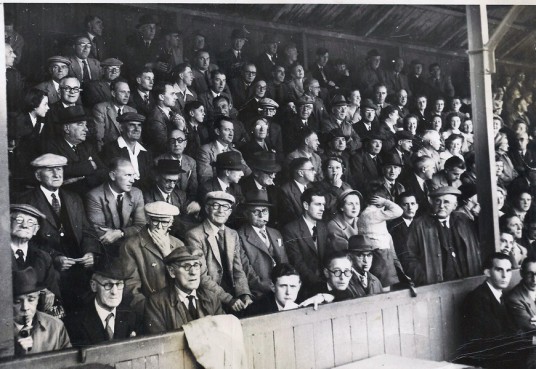 Committee Member Colin Robinson many years ago received from ex player Ronnie Edwards a set of pictures from the late 1950's and on. They contained two crowd shots from the 1961 FA Cup tie v Runcorn. The one below is when we drew at Holly Park 0-0 (this is a packed Woolton Road end with not a crash barrier in site) before losing 2-0 at Canal Street in the replay (above picture of packed stand).

South's President, John Whittingham, recalled it would be the last time South would charter a supporters train  to take fans to the game. British Rail taking fans to Runcorn Station who then walked a mile through the old town to the Runcorn ground on Canal Street. South's train was late to arrive so by the time fans arrived most found South already behind and heading out the cup. Those that had chosen alternatively to get the old Crosville H25 to Runcorn Old Town from Garston arrived on time. It wasn't the first time South's train had arrived late with the FA Cup special to Earlestown the season before first reversing to Edge Hill and then on to Earlestown also seeing South fans late for the game.

South Pennant 1968 The Dawn of the NPL 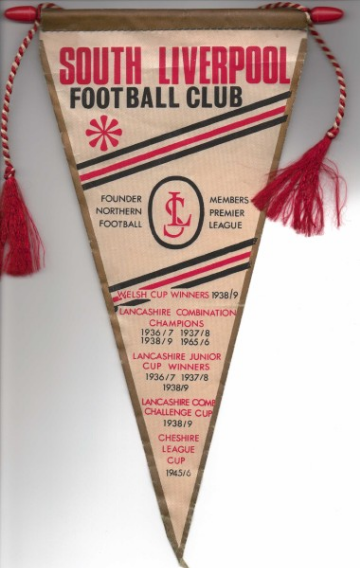 Thanks to Neil Garnett 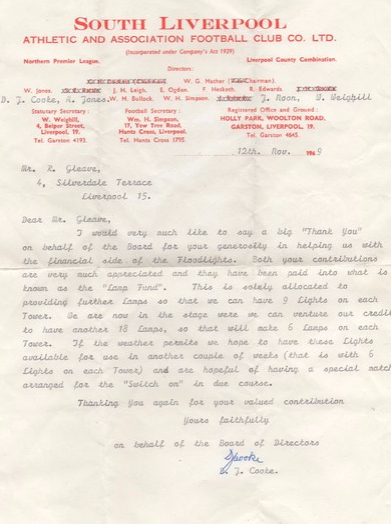 Another cracking piece of South memorabilia to enjoy linked to a recent match sponsor, Colin Gleave. Colin is an old South fan having come along with his grandfather Ralph who was on the Supporters club committee.

Colin generously sponsored a South home game and we thank him most gratefully for his sponsorship of his old club. Colin is now a watcher of FC Halifax and of course they are the new club of the last Football League first team South beat in November 1963 then known as Halifax Town.

In the dawning of the 1970's South were trying to replace their original and by then unfit floodlights and opened a floodlight appeal. In trying to raise the necessary funds several supporters made sizeable donations.

Ralph Gleave of Wavertree was one of those who did and here is the letter he got back from the club. South opened their new lights on Tuesday 13th January 1970 with a match against Liverpool FC. Ron Yeats doing the official switch on at the game. 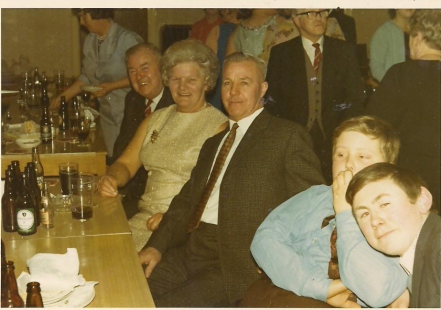 This companion picture to the one onethe 1970's team pictures page is of club officials at the Halewood Hotel function room.

From the scene on the tables it is assumed this was not at the start of the evening! 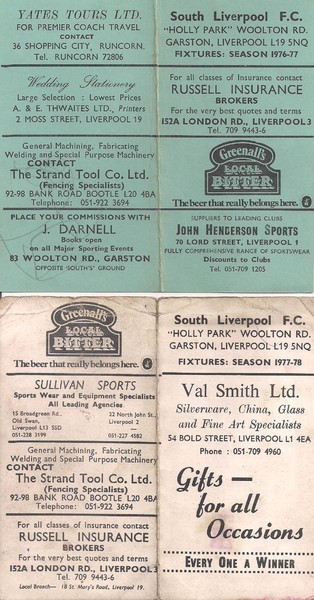 These are two fixture cards that South produced in the late 1970's , the adverts are interesting and thanks to John for giving his copies to feature here 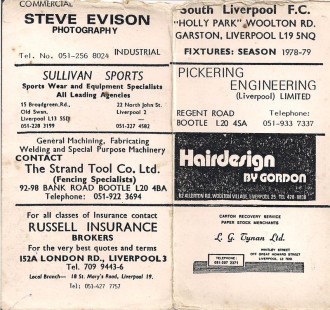