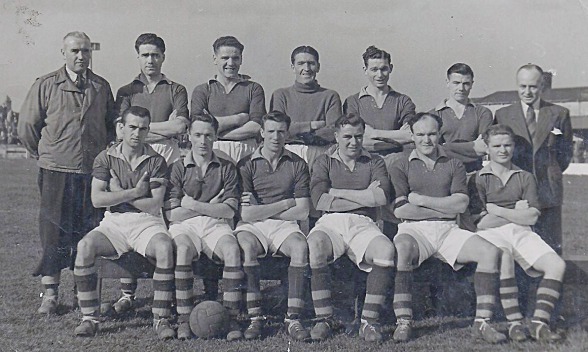 Thanks to neil garnett for this picture

Alex Muir, a Scot, ex Liverpool was a clever inside forward who became a sales assistant in the well known Jack Sharp Sports Shop in Whitechapel. Liverpool

Dr Alex MacLennan, known as Cowboy, after finishing playing became team manager and later was to become a childrens specialist on the Wirral

Frank Rawcliffe hailed from Blackburn and came to South after playing professionally for Swansea Town, Newport County and Aldershot after the war having guested for a number of clubs during it. He played in Italy for Alessandria (then in Serie B) between 1949 & 1951. By the time he arrived at South he was remembered as not the most mobile of players (although only 30) but his shooting ability was still viewed as unbelievable, bagging neigh on 20 goals in around ten or so appearances in two spells Sep/Oct 1950 and April 1951. Frank was known to be a joker both on and off the pitch and died in 1986. 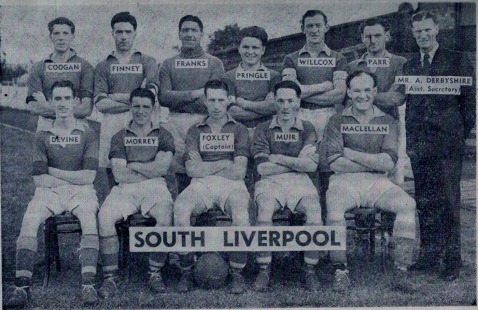 The game saw us win 1 - 0 with our goal coming from Fred Finney. It would be our last win for six league games. The season ended with South next to bottom and moving back to our pre war home of the Lancashire Combination for 1952/53.

The picture is the last with South sporting our original colours, purple shirts with maroon sleeves and orange collars along wiith white shorts and purple, maroon and gold socks. The kit was given up in mid October 1951 for cost reasons and we adopted the white shirts and black shorts which is still our home colours today.

The Purple Maroon Gold would not be seen again until supporter & director Mike Brocken sponsored two kits between 1980 & 1983 which was used as our away strip and can be seen in our 1980's team pictures. 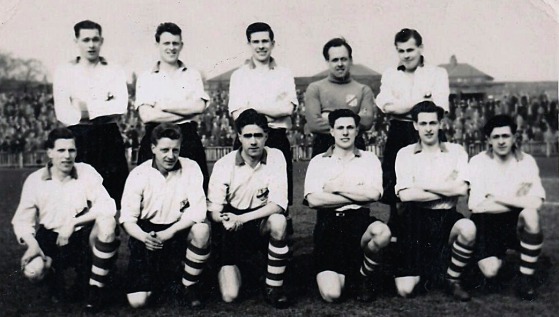 Here is an undated picture but we think it may be 1952/53 as that is the only seasons  Ronnie Edwards and Fred Finney played together and is then post September 1952 as Fred was injured at the season start.

It may help if any eagle eyed fans can spot the ground as its possibly not Holly Park or is it?

As ever any player names (additiona or corrections) please but for now; 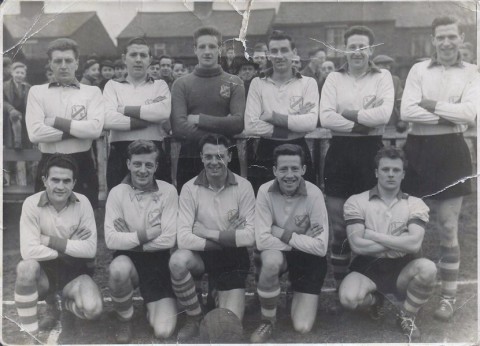 Here is a real South picture rarity courtesy of Colin Robinson that was given to him by Ronnie Edwards. South team in 1956/57 taken at an away ground. Ronnie Edwards known as "Skinner" and his mate Harry Wood were two local lads who made good going to Chesterfiled FC before both returning to South.

An interesting feature is the badge on the shirt. A shield with a red diagonal bar with SL & FC in each half.

We need help naming all the players and knowing which game would be great. .

First player identified is Phil Watkin on the back row Phillip Samuel Watkin at the time lived in Asbridge Street Liverpool 8 and he sadly passed away in 1995. Our thanks to his daughters Barbara Williams and Shirley Ross for giving us this information (april 2014)

August 2017 David Crumpton has identfiied Harry Woods on this photo and the earlier undated one below. David advises Harry was his neighbour in York Street, Garston.

Thanks to Ray Jones for adding names too. 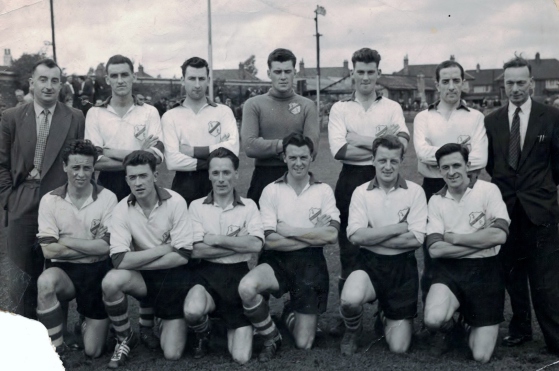 Having finished 15th in 1956/57 South hoped for a better season but only finished 16th and endured a FA Cup exit in mid September at West Cheshire League Stork (2-3) having taken over to Wirral two coachloads of supporters, albeit we played much of the game with ten men due to Les Olsens serious injury and in those days no substitutes!

Its not easy to date the picture which we know has to be in August 1958 as Les Olsen broke his leg at Stork leaving only August home games but we believe its taken on 17th August at Holly Park before the pre season game of First v Reserves which the first won 5 - 0.

Our grateful thanks for the picture to ex South Chairman Mr Peter Hesketh.