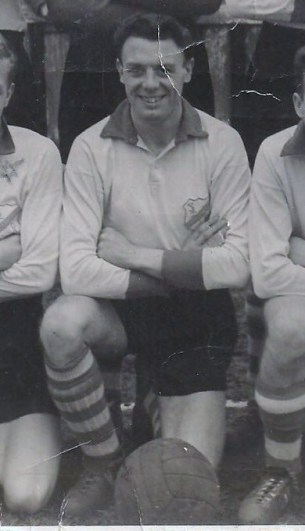 It was with much sadness that all at South Liverpool FC learned of the recent death of our former centre forward Jimmy Nuttall.

Jimmy was born in October 1929 in Garston, and played for South in three seperate spells. First making his mark first in our A Team and then Reserves throughout 1946/47, hitting 20 goals in just 13 Liverpool County Combination games to become leading scorer for the second team. Late 1947 saw him away on National Service and then at Runcorn.

Back at South for 1949/50 his early season prolific scoring had caught the eye and he moved to Southport. He played in the Football League for Sandgrounders between 1950 and 1953. In 1951, Leeds United were interested in him but a bad knee injury saw that not proceeded with, but it would be to South's future benefit.

After leaving Southport in 1953, Jimmy played for Ellesmere Port, Burscough and St Helens before his third spell at South started in 1955.

It would be his golden period with his local club, he quickly became our star striker and as a Garston local he was a Holly Park favourite.

He was our leading goal scorer for five consecutive seasons from 1955/56 to 1959/60 which is a record no-one had achieved before or since. He was only the third player in our history to score more than 100 first team goals and in the intervening 58 years only six others have matched that record.

In 1957/58 he scored the winning goal for us in the Lord Wavertree Cup Final with the game held at Liverpool’s Anfield home.

He started season 1959/60 at Wigan Rovers, before returning to South in the October and hit the goal trail for South! Jimmy left the club for the final time at the end of that season after 179 appearnces and 125 goals.  He lived for many years not far from Holly Park but had been ill for some time. Son Gary confirmed he held many happy memories of his time at both South Liverpool and his Football League career at Southport.

Sincere condolences from everyone at South Liverpool FC go to son Gary and all of Jimmy’s family.

Those at South who recall the now far off Holly Park days, and the very fine players of our past will most certainly continue to hold Jimmy Nuttall in the top rank.