All at South were saddenned at the news in November 2019 that our ex player, Jimmy Mulvihill had died suddenly at home, aged just 51.  Our condolences go to wife Karen and all family at this extremely sad time.

Jim joined South in October 1994 and despite a debut in  howling wind and rain Jim was soon an indispensable team member. He was our Player of the Season in 19994/95 and in 1995/96. Known in the dressing room as “Jesse” he was supported at nearly every game by father Leo and both were immensely popular at South.

Jim would be a mainstay in our defence through to the end of 2002/03. Injuries made the ever-sensible Jim stand down early the next season, having amassed 250 appearances, and is one of only eight players since 1992 to hit that 250 mark!

His son Dan, signed for Cheshire Lines in 2016/17 and Jim followed in the Mulvihill tradition by watching him at games, including being welcomed back at South whenever we faced Lines.

Jim was both one of our very best players and one of the nicest to have donned the South Shirt. He will be missed by us all and will always be well remembered at the club.

A well observed minutes silence was held before the game against Chester Nomads in his memory. His funeral was attended by officials, management and former players of South as we said a sad goodbye to Jim far too soon and were able to pass on our deepest condolences to Karen and all of jim's family. 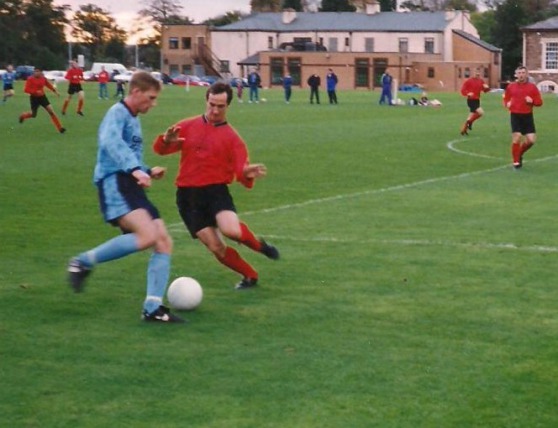 Jimmy (in red) tackles Dennis Evans (Plessey & soon to be a South player) in a 1997 County Comb league game.