South were highly successful before the Second World War, culminating in a Lancashire Combination league and cup double in 1938/39, which was added to with the Welsh Cup.  After the war, we joined the Cheshire League enjoying only moderate results before finishing next to bottom in 1951/52 and then moved to the Lancashire Combination but had to begin in the Second Division. In 1952/53 we faced many reserve sides of clubs whose first team we had previously faced just a few years earlier. Attendances had reduced and money was already tight, a perennial problem for the club in the rest of its semi professional life. This was the South world that Bobby Murdoch entered and be inexorably linked with over the next twenty-five years, alongside his football league career.

Bobby was born in Garston in Liverpool on 25th January 1936 and would join South when he was 16 for the 1952/53 season. The first mention of him is in our reserve programme, on 25th October 1952, when he played and scored in our 4 -3 win over ICI Widnes in the Liverpool County Combination, Second Division but he was already in the Reserves earlier in the season.  His talent was quickly spotted and was taken to Bolton Wanderers where he played for the “A” team, rather than the “B” team, against whom South were competing for promotion. Bolton Wanderers “B” would eventually win the league and South as runners up would also gain promotion.

Bobby played in our first team on Good Friday 3rd April 1953 against Lomax (also from Bolton) when our programme described him as “young Robert Murdoch, an inside left who has played many games for Bolton “A” but remains a South player”.  While he didn’t score that day, he did bag his first South goal a day later at Netherfield Reserves (Kendal) in a 4 -2 win.  In our final run in for promotion, in late April, the 17 year-old was back in the team scoring two in our biggest ever semi-professional win, 13 - 1 over Barnoldswick on 30th April 1953.  He also helped the reserves gain promotion from the Second Division of the Liverpool County Combination that season.

This was also the inuagral season of the Football Associations Youth Cup and we were defeated at home heavily, by Everton (7-0) in the First Round on 17th September 1953 and while we have no team list it’s likely that Bobby played.

He was at South at the start of 1953/54 and scored early on in the season but then there is no mention of him and information on the reserve team exploits is in fairly short supply.  He was described, even then, as the most talented player ever in South’s, albeit short, history. He had great skill and even at 17 was playing with the head of a seasoned professional, with an eye for goal and good strength, all which would stand him in good stead in the higher levels of the game.

During 1954/55, Bobby is not in the team until December and then not back until late March. It is most likely that he was appearing for Bolton Wanderers as well as being available at South.  Now 18, he left South at the end of 1954/55 signing in May 1955 for Liverpool, (then in the Second Division).  At Anfield, he was first as an amateur then a professional from May 1957 and Liverpool cite him as being signed from Bolton Wanderers not South!

Liverpool’s records shows Bobby made 15 league appearances in late 1957/58 scoring five goals, making his debut on Boxing Day  1957, and then two more in the league alongside two in the FA  Cup early in 1957/58. His two in the FA Cup being a winner in a 5th round tie at Scunthorpe and a consolation goal at Ewood Park as Liverpool lost out in the quarter final. He left Liverpool in September 1959, two months before the arrival of Bill Shankly.

He was sold to Barrow then in the Fourth Division team and would go on to play in the Football League for Stockport County, Carlisle United and Southport then moving to the Lancashire Combination for two seasons at Wigan Athletic (1963 – 65).  Bobby made a total of 160 appearances and scored 50 goals in his time in the Football League.  When he signed for Barrow the Holker Street club expected him to move to the town and he refused, preferring to travel, and that seems to be the reason they put him up for sale at the end of the season and Stockport County signed him. 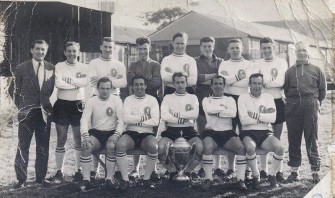 Meanwhile South in the late 1950’s had slid from grace and back to the Second Division of the Lancashire Combination and in October 1960 we appointed Allen Hampson as our player manager.  Allen would over the next four years get the club back in the First Division of the Lancashire Combination and see relative success in the FA Cup, in 1964, defeating Fourth Division Halifax Town in a Holly Park replay.  For 1965/66 “Hampy” planned his assault on the Lancashire Combination league title and integral to that was getting Bobby to come back to his spiritual home and lead South’s forward line to the Championship.  In the following three seasons Bobby played 159 games bagging 76 goals. The League title was won in 1966 for the first time in 27 years and South were the top team in the division.

At the end of 1967/68 Bobby left us for the second time as first team chances were more restricted for the 32 year old as we prepared for the new Northern Premier League. He went to play for Kirkby Town, who were in the Lancashire Combination, on a ground (Simonsqwood Lane) that has long since gone but is now the Liverpool FC Academy.

1968/69 saw South face Kirby in the Lancashire Junior Cup and while they were the much smaller club Kirkby won in a replay at Holly Park, led by the still adept Bobby Murdoch. Worse for South was in 1969/70, having reached the Fourth Qualifying round of the FA Cup, with a first round proper tie beckoning, we again faced Kirkby and Bobby was in the team now as full back. Having drawn 0 – 0 at Holly Park we lost 3 -4 in extra time (having led 2-0 with two minutes of normal time to go) and Bobby was instrumental in guiding Kirkby through.  Bobby enjoyed these triumphs over his old club and each game spoke to the disconsolate South fans, his popularity amongst supporters remained undimmed. 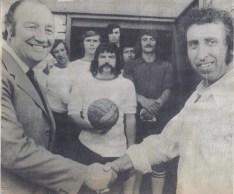 When Allen Hampson resigned his post, in 1972, a new manager was sought and as Bobby Murdoch’s name was an applicant, his long association with the club, along with his efforts as a senior player at Kirkby town, it was no surprise he got the job and here tehn Club Chairman John Hesketh greets him before the first friendly game. 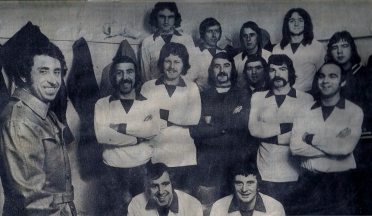 In his three seasons as our manager Bobby was also a stand-by player, making 25 more appearances in the first two seasons and three in his last full season. That first season saw him lead us to the FA Cup First Round Proper, with an incredible win 1 – 0 at Macclesfield Town then going out at Holly Park to Tranmere Rovers 0 -2. Rovers boasting old Liverpool favourites Ian St John, Ron Yeats and Tommy Lawrence at Holly Park in front of over 3,000 spectators.  In the run up to the game there was a lot of publicity including a dressing room team picture, taken a week before the big game (above).

It was all going well and Bobby was approached in April 1973 to go full time at Blackpool as Chief Scout which he turned down.  The players under him respected him as he had been a good pro and knew what the team needed to do. He knew his lads were semi-pro and understood this was not their primary occupation.

He retired as a player at the end of September 1974 after an injury when South lost 2 – 0 at Lancaster City. Although he did make one more first team appearance at Goole in March 1975 in the midstof an injury crisis. His last appearnce in a South shirt was on 6th May 1975 in a Lancashire League reserve game at his former club Stockport County as the reserves were short in numbers as the season had finsihed and he was keen to turn out one last time at Edgeley Park where had played 58 times between 1960 and 1962

1974/75 would be sadly his last full season in charge.  In his three seasons at the helm we finished 17th, 11th and 15th.  In 1974/75 at Christmas we were 6th having won away at Worksop Town and then slumped from New Years Day on and went without a league win until the last game of the season at Morecambe.

His assistant, Peter Rutherford, would take over when Bobby resigned, in late September 1975, after a poor run of results.  Bobby’s departure also signalled a period of South struggling badly in the Northern Premier League, avoiding demotion as a club in the bottom two twice on a vote of clubs, a clear sign of what we had with Bobby and how the finances held back any progress on the pitch for any manager.

Bobby went for a short stint of coaching in the USA before returning to Garston where he continued to help run a taxi firm and moved out to the Chester area.  He did for a time keep an interest in football locally being involved at both Mickle Traffrod and Christleton but he would slowly end his interest in the game, living happily in Mickle Trafford and enjoying walks with his dog.

Bobby had been ill for some time and sadly at age 81 his wife Veronica announced that he had had been subject to a fall and in hospital, Bobby died in hospital on February 12th 2017.

He is survived by wife, Veronica, daughter, Jessica and son, Dominic. His funeral was attended by South Liverpool officials old and new. Current Committee were proud to join with his Assistant Manager, Peter Rutherford, and Coach, Ken Lewis, in paying our respects to a great South Liverpool Football Club man and say one final 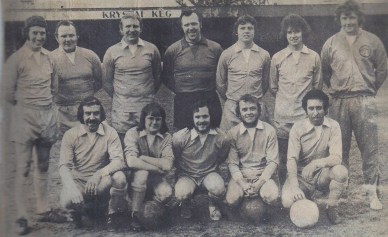 To end here's a gem of a picture. As South's manager Bobby got a few friends and South colleagues to play Charirty games under the title "Murdoch's Maurauders". Here they are ready(ish) to face Billy Butler & Eddie Hemmings Radio Merseyside team in 1974.

On the back row secon in is Billy Eales (a great South goalscorer and Peter's elder brother), Peter Rutherford, our assistant manager, but returning to play in goal some years after his time as South's reserve keeper, next to him was current player John Ravenscroft, who was banging in goals for South and alongside is Elton Welsby then a youthful Liverpool Weekly News reporter. In the front row along with Bobby is Arthur Goldstein and two South fans. Next to Arthur is Brian Dunnigan (now resident in Denmark!) alongside him is current Vauxhall Motors chairman, Alan Bartlam then a dashing winger!.