It was with deep sadness South Liverpool FC learned of the death of our former centre half John Carroll on 5th January 2016. A memorial service was held on January 21st at St Theresa’s Church in Norris Green at which John’s family were joined by many friends in attendance particularly from the field of football.

John joined South from Heswall in the West Cheshire League in 1982, starting in our reserves and graduating to the first team. He made 193 appearances along with eight goals for South from November 1982 to his departure in July 1986 to Weymouth and that would lead on to a very fine non league career including management at Runcorn. John was a great, well liked person at South.

A giant of a centre half on the pitch he formed an unassailable defensive pairing with Laurence Iro in his Holly Park years that saw South record an incredible treble cup win in 1983/84 of the Lancashire Junior Cup, NPL Cup & Liverpool Senior Cup and re-take the Liverpool Senior Cup in 1986. John along with John McInnes served as South temporary managers in December 1984 prior to the appointment of John Rogers. In our NPL Cup win at Maine Road it was "Cagsy" who scored the decisive penalty that led us to the Trophy.

After Weymouth John returned north to gain considerable success with Runcorn as player and manager taking Runcorn to consecutive Wembley FA Trophy finals. His status at the old ‘Corn was shown by the number of ex players and officials in attendance from the Canal Street days .

Also attending was Assistant Manager & Keeper Peter Eales, Assistant Manager George Rooney making the trip up from Worcester to pay his respects as well as our former popular physio, Ewan Simpson who went on to work at full time clubs including Bolton. Linking both South and Runcorn was ex Secretary Graham Ost who held the same position at Runcorn during John’s management.

Sincere condolences from everyone at South go to wife, Julie, and his family. The many at South who recall his days with us will miss him. 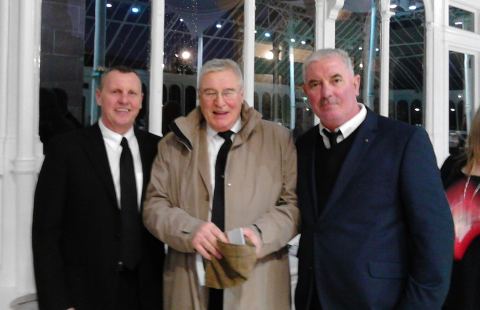