In these pages we record previous team pictures we have from way back when the club was formed up right to 2014. The more recent one are under Recent Team Pics

We will add to to these pages and hope you enjoy them. We detail line ups where known and if you can add any name please send us an email we'd love to hear from you.

If you have a South team picture not on here, please send a copy with any names known and we'll feature it here.

Here to whet your appetite is a grainy one from our treble winning 1983/84 season and we hope to continue to build up our Club's official picture catalogue. 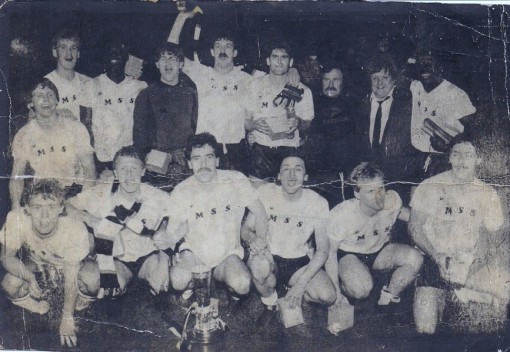 And what better way to start than South with a major cup.

Its a dark Maine Road, Manchester after extra time (1-1) and penalties (7- 6) and South have the NPL cup, defeating Hyde United.

It may be a grainy photo but for all those there, these remain treasured moments - Alvin Mc's goal, John Carrolls sticky 13th penalty that just made it over the line & Kevin O'Brien's joyous victory dash as Hyde failed with the next spot kick and he saluted the empty Kippax Stand to herald our win.

ON THE MENU ON THE RIGHT - CLICK ON THE REQUIRED TIME PERIOD - ENJOY!

COME ON THE SOUTH!