Programmes are produced for our first team home games as well as many for our Reserve games held at The Jericho Lane Hub.

First team editions cost £1, Second team 50p and at games can be purchased by cash or card.

Previous copies can be bought via cheque or bank transfer.

Post & packing is £1 for 1 or 2 programmes and increase for extra copies.

All sales go to club funds.

If you'd like to subscribe and have your current season match day copy reserved let us know and we'll confirm price depending on what you want to be sent.

We also have a wide range of programmes from the current season right back to our Northern Premier League days. Let us know if you have a specific one in mind and we'll check it up and quote a price.

South have only failed to produce a programme three times in respect of competitve home first team games since August 1975 and every competitive home game since the opening of the 1985/86 season has had a programme.

The games missed due to late print problems were;

The Marine game was the fifth of eight games played in ten days as we finished our 76 game season. Those 8 games included 5 at home, the other 4 all had programmes produced, including ones on 23rd & 27th.

The FA Trophy first and second replays were at Bootle on 22nd December then Christmas Eve with the third replay slotted in two days later at the expense of the scheduled NPL game.

From season 2021/22 all away teams in the NWCFL produce programmes, so by season end there were more away programmes in one season than over the previous 30! We have now produced a new club lapel badge for the 2019/20 season and is available at all games, as well as by post.

The new badge builds on the popular 2016 badge with our and the city's emblem more to the front while retaining the band that contains our club name and, of course, is in our club colours.  They are £4 each (plus £1 post) and available as below

The 2016 badge is still available at £4 each and available from our Merchandise table at games or mail eshanknickyb@gmail.com

South have produced several badges over the years but prior to the 2016 badge the last one was back in the late 1980's in the twilight of our semi professional days.

Below are the previous versions the club still hold. We do not have a picture of the pre second world war (our first and given the attendences at the time were in the thousands it was the most numerous one ever produced!).

If you have a photo of it please send it in to us and we'll gladly add it in here. 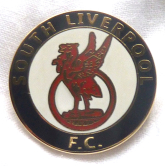 South produced their first club badge in 30 years thanks to the generous support and sponsorship of Jim Milligan. It was first available for the end of of our highly successful 2015/16 season.

The badge features four colours - the clubs colours of White Black & Red with gold lettering. It is still available via chairman@southliverpoolfc.com or at our Merchandise table at games.  This badge is £3 ea 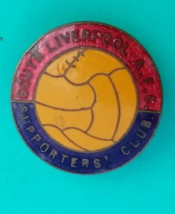 This badge began appearing on web sites for sale around early 2014. It wasn't produced by the club and isn't an official club badge although it uses our Liver Bird emblem but not our full club colours. Still many South fans have purchased it.